Rondebosch Common has a long and rich history, some of it predating formal records. We know that the Western Cape was inhabited as early as 30 000–40 000 years ago by the San and that by the 17th Century, on the Cape Peninsula, there were three KhoeKhoe clans; the Goringhaikona, the Goringhaiqua and the Gorachoqua.

Stone Age pottery was discovered on Rondebosch Common in 1996. This pottery originated from either the Goringhaiqu or Gorachoqua clans. The Goringhaikona, also known as “Strandlopers”, had a diet consisting mostly of marine life and were known to live along the coast. 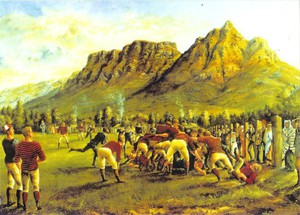 In 1652, The Dutch East India Company established a settlement in the Cape to supply ships along the trade route to India. The first written records of the Common date back to the first British occupation of the Cape in 1795, when Cape Town was occupied by many British soldiers and sailors. To avoid any trouble from these men, they were billeted on the Camp Ground. The Cape was given to the Batavian Republic (The Dutch) in 1803.

In 1804 the troops of the Batavian Government camped on the Camp Ground as they had learnt that the British were going to attack the Cape a second time. These troops relocated to the Wynberg Camp before the arrival of the British due to the number of deaths associated with an outbreak of dysentery.

In 1806, the British won control of the Cape once again and the Common was used as a British Camp site for the next 14 years.

The Common was also used by troops during the Anglo-Boer War and the First and Second World Wars. 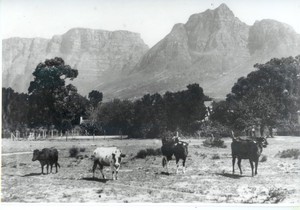 In January 1854, to preserve the Common as public space the Camp Ground, then known as the Pasturage, was granted to the Anglican Church. Reverend Fry of St Paul’s Church in Rondebosch was charged with the administration and rented out grazing rights on the Common to surrounding farms. The Common at this stage was still its original size which incorporated the sites of today’s Red Cross Hospital and the suburb of Park Estate.

From this time Rondebosch Common also became a place where many different sports such as golf, cricket, soccer and rugby were played until 1961 when it became a National Heritage site. Today it is known as a Provincial Heritage site and is used extensively by runners and dog walkers for exercise.

In 1913 the Common was transferred to the municipality of Cape Town, by which time the church had sold much of the original Camp Ground, with the remaining 40 hectares of Lot 17 now enjoying protection under the National Heritage Act. It is also one of the City of Cape Town’s core conservation sites.